The London Scottish Regimental Trust mounted an exhibition to mark the outstanding rôle played by the regiment in the First World war in commemoration of the 100th anniversary of Armistice Day.

‘The London Scottish Regiment in the First World War, Remembered’ held in their Drill Hall and Museum at 95 Horseferry Road, Westminster, was open to members of the public  21st to  23rd September. 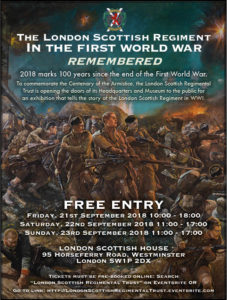